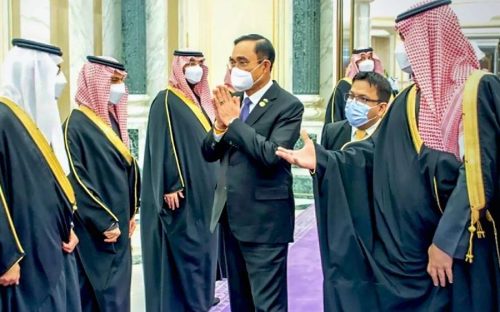 Riyadh, Saudi Arabia, January 27, 2022 / TRAVELINDEX / His Royal Highness the Crown Prince of the Kingdom of Saudi Arabia received the Prime Minister of the Kingdom of Thailand, and they held an official meeting, during which they reaffirmed their mutual determination to resolve all pending issues between Thailand and Saudi Arabia and normalise relations between the two Kingdoms. The two sides also stressed the importance of strengthening the two Kingdoms’ bond of friendship and the opening of a new chapter in the relations between Thailand and Saudi Arabia. The Prime Minister of the Kingdom of Thailand stressed that Thailand places utmost importance to the bond of friendship with Saudi Arabia, and expressed his sincere regrets for the tragic cases that took place in Thailand between 1989 – 1990. He reaffirmed that Thailand had exerted utmost efforts to resolve the cases and that it stands ready to bring the cases to the consideration of the competent Thai authorities if new well-founded evidence relating to the cases should emerge. He also reaffirmed Thailand’s commitment to providing appropriate security to members of the mission of the Royal Embassy of Saudi Arabia in Bangkok in accordance with the 1961 Vienna Convention on Diplomatic Relations. Both sides also reiterated their commitments to do their utmost to ensure the safety of each other’s nationals in their respective countries.

The two sides exchanged views on various regional and international issues, and discussed means and ways to strengthen their bilateral relations in all areas. They also agreed to increase interactions and coordination between their respective government agencies as well as private sectors in order to elevate their bilateral relations to new heights for the mutual benefit of the two Kingdoms.

In the spirit of cooperation and shared determination to revive the friendship and cordial relations between the two Kingdoms and their peoples, as guided by the bold leadership and vision of the Custodian of the Two Holy Mosques King Salman bin Abdulaziz Al Saud, His Royal Highness the Crown Prince of the Kingdom of Saudi Arabia, and the Prime Minister of the Kingdom of Thailand, the two sides agreed to fully normalise their diplomatic relations. This historic breakthrough is a result of long-term efforts on many levels from both sides to restore mutual trust and friendly relations.

The two sides discussed means and ways to strengthen and enhance economic and trade relations between the two Kingdoms by exploring investment and other opportunities in the context of Saudi Vision 2030 and Thailand’s national development agenda, namely the Bio – Circular – Green Economy policy. They also agreed to explore new areas of cooperation, such as renewable energy, environment, digital transformation, and cybersecurity. They further emphasised the importance of fostering people-to-people relations, which will be the cornerstone of the two Kingdoms’ growing relations, as well as the promotion of interfaith dialogue and multi-culturalism.

The two sides agreed to support each other in the international organisations and fora and stressed the importance of the commitment of all countries to the Charter of the United Nations, international norms, and principles of good neighbourliness, respect for territorial integrity and sovereignty, non-inteference in internal affairs, and the peaceful settlement of dispute. They welcomed each other’s constructive roles in their respective regions, particularly Thailand’s vital role in ASEAN as well as Saudi Arabia’s leading role in the maintenance of peace, security and humanitarian and development assistance.

The Prime Minister of the Kingdom of Thailand congratulated Saudi Arabia on its success in hosting and organising the G20 Summit, which has yielded positive outcomes in many areas, such as economy, development, environment, health, energy, etc. His Royal Highness the Crown Prince of the Kingdom of Saudi Arabia also expressed confidence that Thailand’s hosting of the Asia-Pacific Economic Cooperation (APEC) and the Bay of Bengal Initiative for Multi-Sectoral Technical and Economic Cooperation (BIMSTEC) in 2022 will be successful and greatly contribute to the sustainable, balanced, and inclusive growth of the regional and global economy in the post-COVID-19 era.