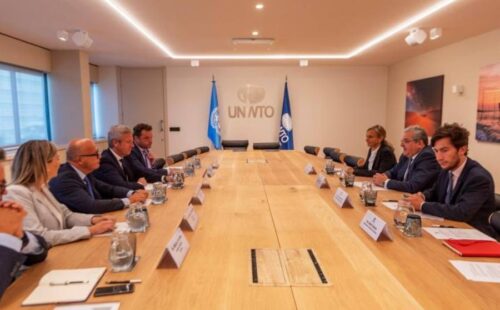 Ourense, Galicia, Spain, September 8, 2022 / TRAVELINDEX / The World Tourism Organization (UNWTO) has joined the European Historic Thermal Towns Association (EHTTA) and the Spanish region of Galicia in the north of the country (Axencia Turismo Galicia) to announce plans for this year’s “International Congress on Thermal Tourism”, which kicks off on World Tourism Day (27-29 September in Ourense, Galicia).

To coincide with the announcement, UNWTO and its Affiliate Member, the EHTTA, have signed a Memorandum of Understanding aimed at further promoting thermal tourism and its benefits.

The Association´s President , Manuel Baltar, said: “The growing demand for open-air and nature-based tourism activities after the pandemic makes thermal tourism an important segment for the future”.

The President of the Regional Government of Galicia and head of the Axencia Turismo Galicia, Alfonso Rueda added: “Galicia is the first thermal destination in Spain and the second in Europe, with admirable thermal stations such as Ourense”.

Thermal Tourism is closely connected to the natural and cultural environment and represents one of the most valuable forms of sustainable tourism. As well as promoting health, well-being, learning, entertainment and mindfulness, it also supports jobs and promotes social opportunity, including in rural destinations.  UNWTO is committed to promoting thermal tourism as a powerful tool to contribute to safeguarding the world’s cultural and natural heritage as well as to provide socio-economic benefits, including the revitalization of rural areas and the creation of stable employment and income-earning opportunities.

The UNWTO Affiliate Members will be part of the official World Tourism Day celebration, due to be held in Bali, Indonesia (27 September), bringing the voices of business, academia and civil society to conversations around this year’s theme of “Rethinking Tourism”.